I wrote about Matt Rajca, a developer who released an update to his Gazette RSS feed reader app but made it a paid update requiring users of the previous version to pay yet again to get the newest version of the app, a little while ago. At that time, Rajca held firm against the criticism of his actions in that forum thread, stating “It’s just $2.99! Maybe the App Store wouldn’t full of crap [sic] if people would be willing to pay a decent amount of money for quality products” in response at one time. However, he’s since made a vague attempt at amends that I wanted to note.

Matt is now offering promo codes for the latest version of Gazette to those who purchased Gazette 1.X. However, the major catch is that this offer is only valid for MacRumors.com forum members. In order to get the code, he’s asking for a screenshot of your iTunes purchase history showing your previous purchase of Gazette 1.X and your iTunes account email address so that he can have proof of purchase and know where to send the code.
First, I do want to say that I appreciate that he’s making this offer. However, I have not seen him apologize anywhere for his poor treatment of the customers who bought Gazette 1.X, nor does this promo code offer seem to apply to any other customers but those who happen to be members of that forum, and chances are that there are still many forum members who purchased Gazette 1.X and have not seen this offer. I would have hoped for a better, more thorough attempt to reach out to unhappy customers to make things right, as well as some sort of acknowledgement that he didn’t make the best decision to shaft his customers to begin with.
For the record, I have not taken him up on his promo code offer, nor do I plan to do so. As I said before, I am perfectly happy with ByLine as my RSS reader app and I think I’ll even go back to NetNewsWire once the transition to Google Reader synchronization is complete since I found it to be a very competent RSS app as well.

Okay, one iPhone GPS app reviewed and another one coming up. I think I’ve gotten a little obsessed with GPS apps for the iPhone, but I feel like I’ve just been waiting for so long for them. I’ve just hated digging out my TomTom GPS unit, doing my damndest to install the suction-cup mount so it will stay put (which it never does), and watch it get confused more often than not while my perfectly capable iPhone stared at me woefully, muttering lame excuses about how no official GPS apps were available for it yet. No more, finally!

My review of Sygic’s Mobile Maps North America navigation app is up here. When the app was first released, it was priced at $79.99. It’s now down to $69.99 and another version that includes only the U.S. is now available for $59.99. For those who don’t venture out of the U.S., I’m sure the latter will be much appreciated, though I personally hope few people take advantage of it, purely out of a personal desire to see more Americans travel outside of the U.S. to experience other cultures and locales. Just pony up for the North American version, okay? It’s only $10 more. Use it to find a white sand beach in Puerto Vallarta or the lovely Notre-Dame Basilica in Montréal, at the very least. 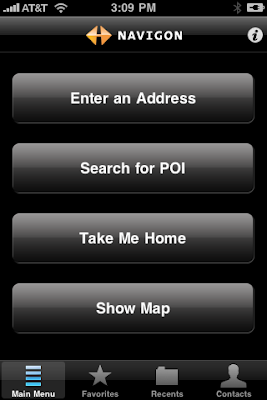 Navigon’s MobileNavigator app (link opens iTunes) is up next for me to review. Right off the bat, it does have a feature that Sygic’s app is missing: contacts integration. Also, its interface is more iPhone-like, allowing you to use two fingers to pinch and zoom in the map as well as a menu structure and keyboard that mimic what you see in a built-in iPhone app. 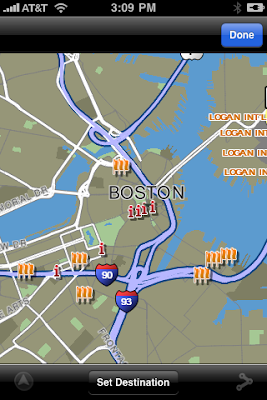 However, although it uses the same map data source as Sygic’s app, TeleAtlas, my street isn’t on its map and it takes longer to acquire a GPS location after start-up. Street names are also hard to read with the daytime color scheme, which cannot be changed. Also, there are no language or voice customization options, nor much in the way of navigation preferences and settings. I’ll start using it to get me around the city this weekend to see how it does performing its main function. 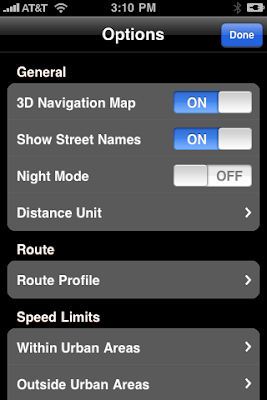 Unrelated to GPS apps, my husband said something astounding to me last night (those who follow me on Twitter already know). He said – and I quote – “I think I might get an iPhone.” Do you have any idea what those words meant to me? I swear I heard angels singing afterward. After I came to, I suggested – perhaps a little too eagerly – that we could go to the Apple store right then to get one for him. He said that wasn’t necessary, so I went to fetch my spare first-generation iPhone for him so he could use it in the meantime. He declined. I offered to answer any questions he might have about the iPhone and inquired about the color and capacity he might be interested in. He then said that I needed to calm down or he wouldn’t get one at all. He also wouldn’t let me see his stupid Razr, noticing my plan to “accidentally” snap it in half written clearly on my face. Sheesh. What a party pooper. I was just trying to help. We’ll probably go see the Harry Potter movie this weekend at a local theater next to an AT&T store. I will work to subtly guide him there to seal the deal. Wish me luck!

I’ve started to use the Mobile Maps turn-by-turn navigation app that I mentioned the other day and it’s working out quite well so far. It runs smoothly and has gotten me to all of my destinations without any problems, though it gave me a more round-about way to get to one than I would have liked (and different from the route my TomTom Go 720 gives me for this same destination). 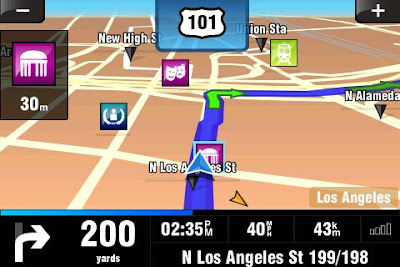 What I like so far:
What I don’t like so far:
I’ll be testing it more to see how it handles incoming and outgoing phone calls and trips with more than one destination. I’m also going to see how it runs on my iPhone 3G compared to my iPhone 3GS.
To be honest, I expected it to make my iPhone run really hot, but it doesn’t. It gets slightly warm to the touch, but that’s it, even when I’ve got my iPhone plugged in with my car charger at the same time. Running it off the battery alone with the screen on all the time didn’t result in as drastic a decrease in my battery charge as I’d expected, to boot. Definitely good so far…

I have 136 apps for my iPhone in my iTunes library, of which 72 are actually on my iPhone at the moment. Once I get a new app, I try it out for a while to see if I like it and if I’m really using it regularly. If not, it comes off my iPhone, and I try to write a review for the App Store on it. Unfortunately, I’m falling far behind in that last task, but what can you do?

At any rate, the point is that I love apps for my iPhone. I have tons of games, exercise and work-out apps, apps to help me track my finances, and much more. Up until now, I haven’t had any major issues at all with the apps I’ve downloaded – they either work or they don’t and they suit my needs or not. I have now, however, encountered my first issue with an app developer who has most thoroughly shafted his customers and I feel compelled to share it. Let me give you an overview of what happened with this particular app, Gazette:
To be clear, I know this isn’t the end of the world. It’s just an app and it’s just $3. But I think this behavior by a developer is deplorable. In my eyes, I had an app that was so slow it was unusable, and to get the improved app that does exactly the same thing, albeit purportedly faster, I have to pay for it again. Rajca had feedback from me via an iTunes review, completion of an optional survey he posted in a forum I frequent, as well as direct feedback from me in that same forum. I was not the only one who had the same issues with his app. (I should note that there are users who are perfectly happy with Gazette, though I must think they must only track about 10 feeds for this to be possible.) And, he had previously stated that 2.0 would be a free update to existing customers. Having a change of heart is one thing, but going back on your word to customers is another entirely. To parrot my mother, he should be ashamed of himself. And you can bet he’s lost me as a customer.

The official macgirl.net recommendation: Don’t buy Gazette and let developers like Matt Rajca think it’s okay to go back on their word and treat customers like crap. Behavior like this is right up there on my list of pet peeves, in between Close Talkers and customer service ineptitude (previous experiences with AT&T come to mind here).
Two RSS readers I can stand by are Byline and NetNewsWire. I started out with NetNewsWire but switched to Byline since it syncs with Google Reader, which became my primary RSS feed subscription manager. Both are speedy and have great features, and their developers don’t appear to feel the need to shaft their customers.