I love reading. I was one of those kids who spent more time at the library than anyone else and walked out with a stack of books to borrow each week. I used to ask my parents to drop me off at the public library and pick me up several hours later, which always earned me strange looks from them. “Are you sure you want to stay here that long?” they’d ask. I’d mutter a hasty “Yes” as I rushed into the library to browse through the musty bookshelves, usually starting in the science fiction section and working my way through to young adult books and fiction.

As an adult with less free time to read than I’d like, I still love reading. Even more specifically, I love ebooks. I’ve been reading digital books for nearly 10 years now starting way back in the day when I got my first PDA, a Palm Pilot V. I had discovered Peanut Press (now eReader.com) and reveled in the ability to have a bunch of books in my pocket to read any time I wanted. Far easier to manage than the stack of books I carried to and from the public library as a kid.
I’ve read ebooks on just about every portable electronic device I’ve had since my Palm V and even tried a first-generation Kindle to take a shot at a dedicated ebook reader (it didn’t work out). As you might expect, the iPad is turning out to be an excellent ebook reader – so much so that my husband, also an avid reader, now wants his own iPad to use an ebook reader + portable entertainment device.
On my iPhone, I primarily used the Kindle and eReader apps to access previously-purchased ebooks and

Thanks to a fantastic dev I met online (you know who you are – you ROCK!), I have installed the 4.0 beta firmware on my iPhone 3GS. I’ve been using it for the past couple of days and have a few first impressions about what I really like about it so far.

Folders are beautiful. I have a ton of apps and while the search function does help me get to them a little more quickly than scrolling through multiple pages of apps, I’ve longed for folders pretty much since the day the App Store opened. Apple finally implemented this and I’m loving it, though each folder can only hold a maximum of 12 apps, which is a bit disappointing. One dev pointed out to me via Twitter that this was most likely to avoid the need to scroll in the pop-up “window” that shows folder contents. This makes sense to me given Apple’s design sense but I still wouldn’t mind a little scrolling to have more than 12 apps in a folder.
Multi-tasking is handy. If you’re like me, you might get a little impatient while you wait for a web page to load and wish you could easily do something else on your iPhone at the same time.

I bought the official Apple iPad case when I picked up my iPad on release day. Frankly, I shouldn’t have picked it since I already had a book-style case on order (this moleskine-style DodoCase, which just arrived and I put up a first impressions post + video on my blog) and I want a fitted silicone-style case as my second case to use around the house, which I purchased from Cimousa via eBay. I’ve found the Apple case to be useful for protecting my iPad from scratches and whatnot, but it offers little drop protection and drives me a little crazy from a cosmetic standpoint.

First, the positive things about the Apple iPad case:
On the negative side, here’s what I’ve found:
At $39, the case is more expensive than it’s worth (though I might be a little more forgiving if it came with a screen protector and cleaning cloth). If this case were made by just about any other company, I would pay no more than $20 for it.
And while I love Apple, it seems like the logo on the front just helps advertise that I have an iPad in my hands, and it feels like an flashing arrow pointing me out to thieves saying “Mug this girl!” Of course, this is my mistake for buying this case to begin with and not Apple’s fault at all – it’s reasonable for it to put logos on its products and I should select a case without one if this is of concern to me.
In the end, I’m pretty sure I’m going to sell this case, especially since my DODOcase has arrived and functions almost just as well and offers better protection and camouflage for my iPad. Oddly,

I’m waiting in line at the mall for my iPad. I didn’t expect this but they set up two lines – one for people who had pre-ordered and another for those who did not pre-order. I got here around 7:30 am and am 3rd in the pre-order line. *Insert Arsenio-inspired arm movement and “woot” here.*

The other line has grown quite a bit already and now has around 50 people in it, up from about 25 when I’d arrived: 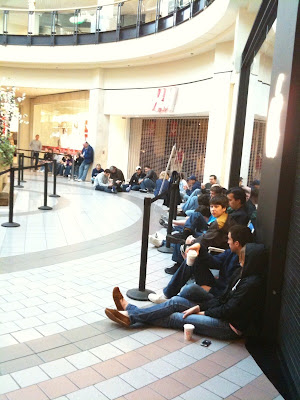 I am far too excited right now. If all goes well, I should be out of here shortly after 9:00 with iPad in hand!

Sent from my iPhone