Speculation and rumors abound on the internet about what will be revealed at WWDC next week. Of course, my guess (along with just about every other Mac fan out there) is that a new iPhone will be released. I’ve seen a number of fake pictures on the internet, but this is the one I like the best: 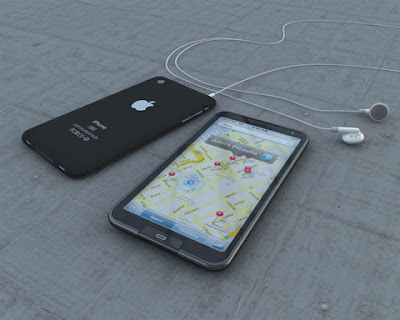 I’ve seen this over at everythingicafe.com and a few other sites. I could seriously dig a new iPhone that looks like that. I’ve seen the picture/rumor of the matte case back for some time now and I wouldn’t mind that at all. I hate shiny surfaces that attract fingerprints like there’s no tomorrow, particularly on a device that’s frequently handled. I think all cell phones should have matte surfaces – if I were queen, I’d make it so.
Only a few more days to go before the WWDC keynote!

There’s a little excitement coming tomorrow with the Apple event scheduled for 10:00 a.m. PST.  I will be tuned in, as usual, blatantly ignoring my work and possibly shushing my co-workers for the duration (though I’m thinking some of my co-workers will also be paying attention to it). It looks like one of  my favorite coverage sources for events like this, Macrumors.com, won’t be there live, so I think I’ll default to Engadget or Gizmodo to get the scoop as it happens.

Kevin Rose of Digg has provided a lot of the rumors for this event, describing a new iPod Nano and iTunes 8, and iPod Touch 2.1 firmware, with the firmware update available soon after for the iPhone.  I am always excited to hear about new Apple products, but I’m particularly interested in the new firmware for the iPhone since I’ve been pretty disappointed with the stability of mine.  I’ve suffered from the dreaded apps-closing-as-soon-as-they-are-opened issue that I could only solve by uninstalling and reinstalling all of my apps. And Google Maps will often not find my location at all, even after waiting for 10 minutes for it to get a fix.  I get nothing.  Bupkes. Not even the large circle telling me I’m somewhere within the prescribed 5-mile radius when I’m out in the open with nary a tree or high-rise building in sight. Oh, and I’ve found that music will start playing when I plug my headphones in at random. And I am so sick and tired of the keyboard lag in every application where I try to type something.  I may be intentionally mis-remembering things, but wasn’t 1.1.4 far more stable and problem-free than this?

You’ll be happy to know that I bought another case for my 3G iPhone – as promised in my Griffin Nu Form case review, I did get the new Incase Slider. I broke down before they released any new colors and simply got it in matte black. It’s on my iPhone now and it sure is purdy. Look for a review on it shortly.

Alright, back to work!